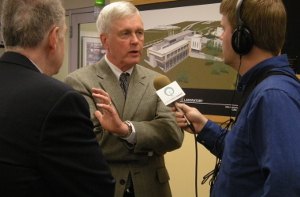 During its grand opening on Tuesday, Sept. 23, 2014, Christopher Atchison, Director of the State Hygienic Laboratory, where the new center is located, predicted the facility will have a far-reaching effect. The Hygienic Lab is Iowa’s public health and environmental laboratory.

Not only will the center serve Iowans interested in advancing Science, Technology, Engineering and Math (STEM) education, but "this will become a national resource," Atchison told the audience that included officials such as Coralville Mayor John Lundell, state Sen. Bob Dvorsky, state Rep. Dave Jacoby and University of Iowa Provost P. Barry Butler.

"As we move into the next generation of laboratory science, it is important that we continually develop contemporary ways in which we deliver information and share knowledge,” Atchison said. “I believe this center promises to do just that for Iowa, and our regional and national partners."

The ribbon-cutting for the center, in the lower level of the State Hygienic Laboratory's site at the University of Iowa Research Park in Coralville, marked the official opening of the facility, designed for hands-on learning in a laboratory setting.

Before that official launch, about 400 students and 40 teachers already had used the site for camps and training, said Drew Fayram, the center's coordinator.

The center is the only facility of its kind in Iowa — and one of few in the nation — that combines a functioning laboratory and a conference center for educators, students and other members of the community.

Fayram, who joined the Hygienic Lab as an Emerging Infectious Diseases fellow, is reaching out to those who can benefit from the facility to schedule training and other events.

The new center features classroom space, training laboratories equipped with biosafety cabinets and a conference room that can seat up to 150 people or be divided into two rooms. All rooms have extensive audio-visual technology, including video conferencing to allow people gathered in the conference room or via an externally connected site to observe and question scientists about laboratory testing and experiments.

The new facility offers opportunities to students like tenth-grader Lily Fuger, and ninth-graders Aaron Wills and Isaac Moeller, all of Central Lee High School in Donnellson. All three, who were mentored by lab staff, presented their science projects as part of the center's grand opening and said they hope to do further work with the lab.

"It's amazing," said Alicia Schiller, a high school biology teacher at Central Lee. "I think there is definitely a lot of potential here." Schiller said her classes, for example, could conduct work using the lab's capabilities that could not be performed at the school.

Surrounded by samples of living and nonliving aquatic insects and other organisms, limnologist Mike Schueller was among the lab's staff demonstrating some of the hands-on learning that can be performed at the new center.

"This is very much of interest to school-aged kids," Schueller said, noting that among its capabilities, the facility will offer microscopes with cameras that can project onto large screens, showing microscopic details found in water.

Water filtering, color chromatography and DNA extraction are among many other projects for which the new center offers the proper scientific materials.

"We have the real-life equipment and the people who work with it on a daily basis," said Rick Bonar, the lab's STEM education and training coordinator.

In a message for the grand opening, University of Iowa President Sally Mason called the center a milestone in the development of diverse science programming by the University.

"No place else can educators, researchers and students work together in a laboratory setting dedicated to public health and environmental stewardship," Mason said, noting that the dream for the center originated shortly after the Hygienic Laboratory's new building was completed in 2010.

"At that grand opening, the promise of creating a fully functioning laboratory designed for education and enterprise seemed a distant possibility," she said. "Today, we celebrate the realization of that dream."

Funding for the center was provided by the Roy J. Carver Charitable Trust, city of Coralville, University of Iowa and its Office of the Vice President for Research and Economic Development, and the state of Iowa.

For additional information about the center, contact Drew Fayram at drew-fayram@uiowa.edu or 319-335-4864.