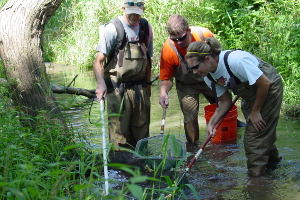 Leeches are segmented worms (like earthworms) and are primarily found in freshwaters though there are many marine and terrestrial (mostly in the tropics) species. There are about 70 species known in North America. In contrast to many of the other invertebrate groups discussed here, leech diversity is greater in the northern U.S. and Canada than in the southern areas of the continent. Though often called "bloodsuckers," many species are predators or scavengers, and only a very small proportion of species feed on warm-blooded animals like humans. Leeches are present in most surface waters in Iowa and we typically find several species in each stream surveyed. Though they have a bad reputation, many species might be considered "beautiful," displaying intricate striping, mottling or coloration. Unfortunately, they often curl tightly when preserved making it difficult to get good photographs. A list of the species we have encountered to date is presented below.

Sometimes called "freshwater shrimp," scuds do have some "shrimp-like" qualities but are only distantly related to their marine kin. Though there are about 150 North American species, many have unique (often subterranean) habitats. Only a few widespread/common species in the genera Hyalella and Gammarus are likely to be encountered in Iowa's surface waters. Though the two are collected in the same waters, Gammarus seem to be more common in the east with Hyalella prevalent in western Iowa. Scuds are often abundant in shallow flowing or standing waters containing vegetation, roots, leaves, or other debris. Grab a handful of vegetation from a coldwater (trout) stream in northeast Iowa and you will likely see hundreds of scuds trying to make an escape.

Snails are easily recognized by most people, with most snails living on land or in the ocean. There are about 500 freshwater species in North America, occupying a variety of standing and flowing waters. Most are "scrapers" that feed on algae they scrape from the surface of the substrate they are moving over. The clean trails left behind snails grazing along the sides of an aquarium illustrate their feeding methods. Many species of freshwater snails have shown dramatic declines in abundance and ranges due to declining water quality and especially habitat loss/modification. Relative to aquatic insects like mayflies or stoneflies, snails are well represented in older (80+ year) collections, which allow comparisons to their present occurrences. For example, in Iowa we have little knowledge of the aquatic insects present in the state over 100 years ago, but have a respectable list of the snails found then. As in much of the county, Iowa's aquatic snails show major declines since that time. A list of the aquatic snails we have collected is provided below. Keep in mind that we have primarily sampled streams. The "left-handed" Physa is common in streams across Iowa. Most of the other species listed are encountered infrequently.

This group of crustaceans is primarily marine or terrestrial with about 130 freshwater species in North America. As with scuds, many species of aquatic sowbugs have unique habitats (often subterranean) or localized distributions, and a handful of species are commonly encountered in surface waters. Nearly all of our Iowa collections have been the genus Caecidotea. Aquatic sowbugs also occupy similar habitats as scuds, favoring shallow waters with abundant cover like plants, roots, leaves or rocks. They are often very common in springs and the headwaters of cold/cool streams and some seem to be more tolerant of organic pollution and low oxygen levels than scuds.

Water mites are arachnids, related to spiders, ticks and daddy-long-legs and look like small globular (sometimes brightly colored) spiders or ticks. Though not well studied, there are over 1500 species in North America occupying a range of freshwater habitats. Shallow, weedy areas of standing waters support the greatest abundance and diversity but many kinds live in streams/rivers. Water mites are parasites on other invertebrates during their early life stages. Many continue to parasitize or prey upon invertebrates in later stages, though some are scavengers or feed on plants. Water mites have been used in Europe as indicators of water and habitat quality but have not been studied sufficiently here for such uses.